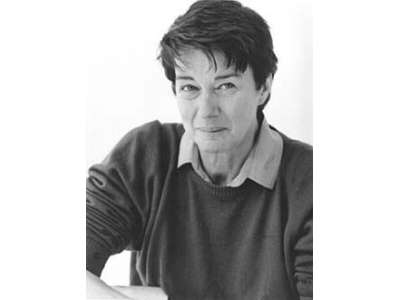 "For me, Nature is not landscape, but the dynamism of visual forces - an event rather than an appearance - these forces can only be tackled by treating colour and form as ultimate identities, freeing them from all descriptive or functional roles." Bridget Riley.

Bridget Riley was born in London and studied there at Goldsmith's College (1949-1952) and the Royal College of Art (1952-1955). She was influenced by her study of the Neo-Impressionist technique of Pointillism, but taking up 'Op Art' in the early Sixties she worked initially in black and white. In 1958 she was deeply impressed by the large Jackson Pollock exhibition at the Whitechapel Art Gallery in London. This was one of the reasons that led her to pursue her own art, finally leaving her job as an illustrator at the J. Walter Thompson advertising agency in 1962.

In 1966 Riley turned to colour with 'Chant' and 'Late Morning'. She was already receiving considerable recognition, secured in 1968 when she won the International Prize for painting at the 34th Venice Biennale. After a major retrospective in the early Seventies, Riley begins to travel extensively. Up until early 1980, she had been working on her 'curve' paintings, but these came to an end after a particularly inspiring sojourn in Egypt. Her extensive exploration of colour and contrast began after this. In 1983 she designed a mural made up of soothing bands of blue, pink, white and yellow for the Royal Liverpool Hospital. In the same year, she made her first set for the ballet 'Colour Moves' first performed at the Edinburgh Festival in 1983. Three years later she met the postmodern 'Simulationist' painters Philip Taaffe and Ross Bleckner, and inspired to introduce a diagonal element to her work, thus adding another dimension to her fascination with the juxtaposition of colours.

Bridget Riley is one of the finest exponents of Op Art, with her subtle variations in size, shape and position of blocks within the overall pattern. Her work is characterised by its intensity and its often disorientating effect. Indeed the term 'Riley sensation' was coined to describe this effect of looking at the paintings, especially her early black and white pictures. Riley is fascinated with the act of looking and in her work aims to engage the viewer not only with the object of their gaze but also with the actual process of observation.