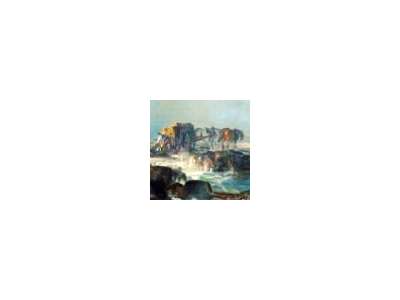 Edmund Blampied was born on a farm in Jersey on 30 March 1886, five days after the death of his father, John Blampied. He was the last of four boys and was brought up by his mother, Elizabeth, a dressmaker and shopkeeper. His first language was Jérriais He finished parochial school at the age of 14 and went to work in the office of the town architect. Some of his pen and ink sketches of an agricultural show in May 1902 were noticed by Mlle Marie Josephine Klintz, a woman who ran a local private art school. She gave the young Blampied his first formal lessons in art and introduced him to watercolours. His caricatures of politicians such as the Constable of St. Helier, during an election brought Blampied to the attention of a businessman named Saumerez James Nicolle who offered to sponsor him at art school, provided he tried to get a scholarship.

Blampied’s earliest etchings are dated December 1909. Blampied’s prints were first shown at an exhibition of students’ work in March 1914, where his etching of an ox cart was noted by the correspondent of The Times.The first print believed to have been published was an etching entitled At the wings which were reproduced in the Annual Report of Bolt Court in 1914. Blampied later recorded his method of working on zinc for etching and copper for drypoint in The Art of Etching. Blampied wrote: "I generally chose from amongst my various drawings one which would tend to produce a successful plate. I do not trace onto the copper, but copy a few important lines onto the bare metal with litho-chalk. I then sketch over this with an ordinary sewing needle and rub in a little black oil colour.  From the first, my efforts are to improve on the sketch until I consider the plate finished. . . In very few cases do I touch a plate after the first proof, so the majority have but one state. If I am dissatisfied with either the composition or details, I prefer to start afresh upon another plate rather than make radical alterations."

Blampied’s etchings were brought to the attention of the art dealers and publishers Ernest Brown and Phillips of the Leicester Galleries in London through an introduction from H. Granville Fell, an artist and art editor. The Leicester Galleries offered Blampied a contract and three prints were shown to the general public in February 1915 in the first of a series of exhibitions of prints called Modern Masters of Etching. Blampied’s most famous print, called Driving home in the rain, which had been designed in 1913 and transferred to a zinc plate in 1914, was not shown at the Leicester Galleries until November 1916 where, according to a Jersey newspaper of that time, it received a great deal of attention and admiration.

Blampied was a prolific illustrator and over 600 issues of magazines and newspapers have been recorded containing his work between 1905 and 1939. His illustrations appear in around 50 books, and he designed the dust jacket for some 150 other books, mostly novels. He also designed menu cards, loyal addresses, sheet music, Christmas cards, commercial advertising material and bookplates.

During his career, Edmund Blampied produced some 200 etchings and drypoints, and more than 80 lithographs and lithographic prints, many of which depicted rural life in his beloved island of Jersey. His scenes of collecting seaweed, called vraic, from the beaches of the Island, using a horse and cart were, he said, his signature tune. 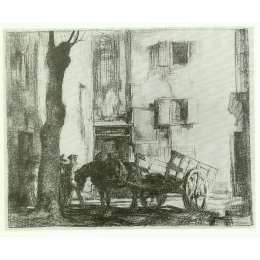 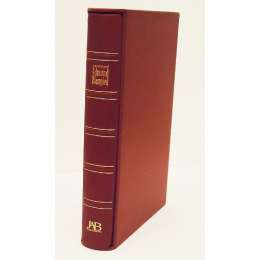 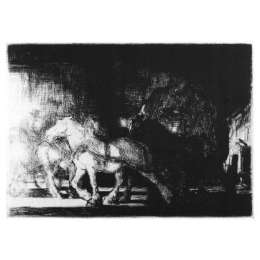 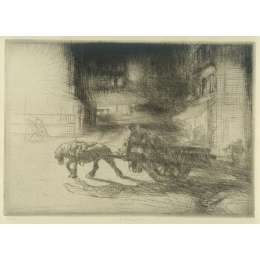 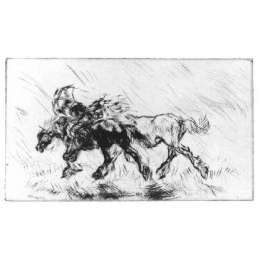 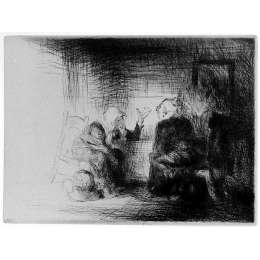 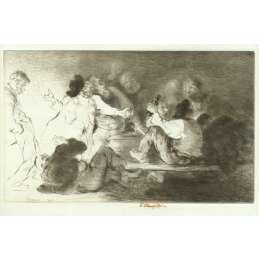 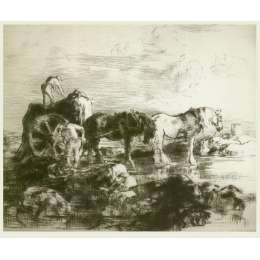