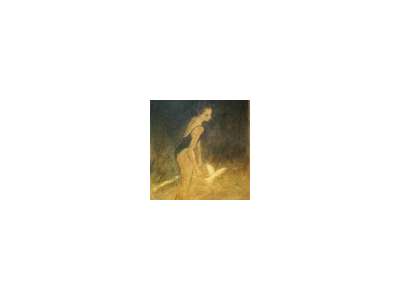 Roy Fairchild - Woodard was born in 1953 in Surrey, England an artist renown for his colourful serigraphs.

Roy Fairchild lives and works most of the year in his country home. This peaceful environment is fundamental to his well-being and stability as an artist, although he travels throughout Europe to obtain new sources of inspiration. Roy Fairchild is particularly influenced by the painters of the Renaissance and he visits Italy in particular to study frescoes, tapestries and paintings and to see for himself the techniques with which they were executed.

His vision is coloured by his immersion in this past. His surfaces are rich and sumptuous and he uses varied interwoven elements such as fabrics and flowers in his work. The crumbling plasterwork of ancient frescos are also alluded to in his use of plaster as a base for acrylic and oil overpainting.

Roy Fairchild's admiration for Egon Schiele and Gustav Klimpt can be seen in occasional references of line and decoration but he has extended their techniques to produce something altogether bolder and contemporary.  After leaving school at sixteen to train as a technical illustrator, he then took a degree in graphic design. Having completed his education he set up his own studio. He soon found it was difficult to make a living from his own work and supported himself and his family for several years by producing, under the name of Woodard, illustrations for record sleeves, advertisements and books, as well as decorative serigraphs and lithographs.

Roy Fairchild achieved considerable popularity with his suites of pastel coloured figurative prints. Experimenting with different techniques, he developed entirely new methods of achieving effects in serigraphy to obtain qualities of light and colour that are now in general use.

Roy Fairchild eventually gained sufficient financial security to be able to give up his commercial illustrations and return full time to his own painting and printmaking, which he does under his family name, Fairchild.  As a printmaker, he has found most favour with serigraphy, where the rich, opaque colours of his work, are furthered by the medium, although the figure drawings he still prefers to translate into etchings.

For the past few years, he has been giving classes to teach his skills and techniques to young artists.